We Need More Than Symbols; We Need Courage

I was having an online conversation with an old friend who played on my first "solo" CD a while back. We were talking about politics, because he posted some meme about voting by mail. It saddens me when I see people posting misinformation, regardless of which "side" it originates.

Anyway, we started bantering back and forth, and pretty soon, I found myself sharing beyond the subject, and sharing how I feel about politics and music, so I figured I would give it a little edit and share here:

"...the myth about this whole "left wing vs. right wing" BS is just that, BS, meant to divide us and keep a certain class in power. DT got elected because he talked about the so called "elites" and played on that fear and division. How is he not an elite? He has gold toilets. That is what I don't get about how he became the "savior" of the everyman. My impression is many of the people who voted for DT are not big Trump fans, just as many of the folks who voted for Obama were not fans of the man (though he certainly possesses many admirable qualities) - many were voting for change, and realized the symbolism of having our first black President.
Many of us are sick of getting the shaft by the "machine" -- and the media controls the narrative, which explains the negative feelings many of us have about the media. However, there is a difference between media driven by profit  -- and journalism, which is driven by a desire to find the truth. It is very similar to a musical or artistic endeavor driven by profit or one that is driven by the need to express oneself. Again, this is how I see it. Your perceptions may vary.

When all is said and done, it boils down to what we value. Who we elect to the highest  office in this land is a mirror to our "collective soul."
Thanks for reading.
ox,
Mari
Posted by M Tamburo (A Vehicle for Change) at 7:36 AM 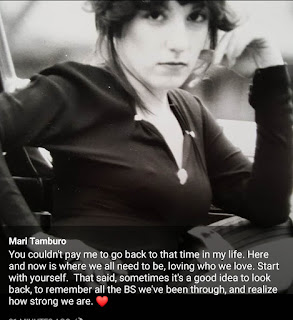